After thinking about the tournament and how my list performed, I decided to put my thoughts down on pseudo paper.
Do not get me wrong, placing 15th is a great result and I am very very happy with it. But each and every games was a close fought slugging match. I had to use every ounce of my skill as a general to get the wins, and in one case the dice decided the win, not my skill.

So I am going to discuss my list design and thoughts and reasons why I decided to take what I did.


Okay so first, the craftworld book has a lot a great stratagems that enhance the Eldar army on the battlefield, to make the best use of these, I first built my army for command points.

I decided that to play how I wanted to play I needed between 12-13 cp. So a Brigade detachment for required.

This locked me into having 3 hq, 6 troops, 3 elites, 3 fast attack and 3 heavy support choices.

I also wanted to have the majority of the runes of battle powers available so that meant I needed a supreme command detachment.

So now I needed to have 6 hq, 6 troops, 3 elites, 3 fast attack and 3 heavy support choices to make my army legal.

So all this would give me 13cp to play with during deployment and the battle rounds.

So far so good.
On to my Choices to fill the slots.

Troops
Rangers
I decided to fill my troop requirements with three units of rangers for deep strike push back and character sniping ability.

Dire Avengers
The Dire Avengers were to form my main battle line with the main unit of 10 acting as the anchor for my line. the two smaller units of five were to be harassers and objective grabbers.

Striking scoprions
I filled these slots with three units of 5 striking scorpions all equipped the same, these units with their built in deep strike allowed me to make my opponent think about their deployment and deep strike protection.

Fast Attack
Swooping Hawks
Two units of swooping hawks were my dedicated anti horde option, with each squad putting out 20 shots, they would bring a volume of fire to my list that was needed. The also deployed on the table in my games, to allow for turn 2+ bouncing around shenanigans.

Warp spiders
I included one unit of these because of their strength 6 weapons, and I purchased the exarchs power blades, simply due to wysiwyg rule, I did not fancy cutting them off my metal model. I would have like more of these but I only own 5 models.

Heavy Support
2 units of 10 dark reapers, these guys were the ranged power to my list and did the majority of the heavy lifting each game.

A unit of 1 Warwalker with Starcannons, Originally there were two in this army , but i needed to drop one to upgrade my large unit of avengers from 5 to 10.

HQ
An Autarch
She was here to provide rerolls, immunity to moral due to puritanical leader warlord trait and reclaim some CP on a 6+. With a banshee mask, powersword and shuriken pistol, I found him to be under gunned. The shimmer plumed helped this somewhat.

2 farseers
The runes of fate are a great set of powers, during play testing, i felt i needed at least 4 of them in my army.

Warlock
He was included in my army to allow access to the stratagem seer council. 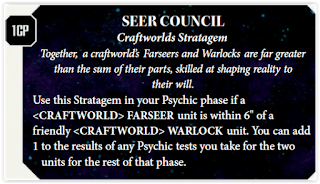 Spiritseers
These three were included to give my army another three runes of battle powers, and for ten points more than a warlock. They survive for longer and have a proper smite if I needed it.


So that were my thoughts going into Cancon.

My after Cancon thoughts on my army was that I gave myself tunnel vision chasing those 13CP.

In virtually every game, I was looking to my army for a third threat to inflict damage on my opponents.
Whilst I did set out to achieve my goal of winning six games, they were all apart for one game hard fought, but in all of them, I felt my army needed more teeth.
This is something that I will need to develop further.

So what would I change.

I could have reduced my reapers and large dire avenger squad to 9 man size, so as to deny my opponents the choice of the reaper secondary mission.

Speaking of my large unit of dire avengers, they cost 140pts. For the same cost I could have used 17 Guardian defenders and used the 1cp strat to give them 4++ save. Again, I blame tunnel vision for this.

Making these changes would have made reaper only worth 1 point instead of three.

Going first in a few games would have helped, but the dice decide.

I would equip my Autarch with a fusion gun or reaper launcher to make use of his 2+ to hit. This was where keeping him cheap and cheerful was not the right call.

Adding the needed bite to my list. This honestly is something, I have as yet not worked out how I want to approach it.

My Scorpions and Hawks had an effect each game, the most notable was in game two when a unit of five chewed their way through a eight strong warlock conclave.

My war walker provided some support in most games, but a single walker had minimal effect on the game, will have to rethink this, as it is a good harasser, but its output in most games was minimal.

I will try out different options for the future.

Anyway that is my thoughts
Cheers Lupus.